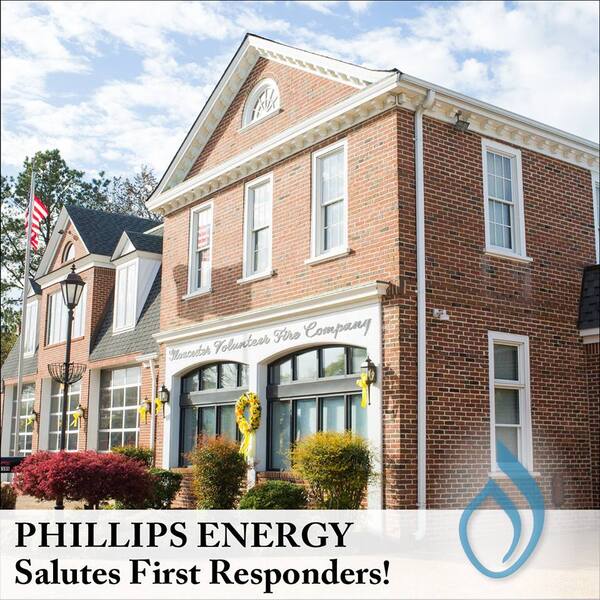 Hero is defined “a person or character who, in the face of danger and adversity or from a position of weakness, displays courage or self-sacrifice—that is, heroism—for some greater good.”

Whether a car accident, a fire or a health emergency, first responders put their lives on the line to save the lives of others each and every day. Day or night, we can always count on these courageous men and women to come to the rescue during a time of need.

We are proud to salute our first responders - all of them!

Kevin Anderson has worked at the Gloucester location as a part-time LP Driver for seven years. He works full time as a paid Firefighter/EMT with the City of Newport News. Kevin started his profession 27 years ago.

“I wanted to be able to make a difference in peoples lives and help them in their time of need,” said Kevin. “When I was 16 years old, my house caught on fire and I remember watching the fireman do their job and from that moment I was drawn towards this career.”

The most rewarding part of his job?

Eric Bauman works at the Gloucester location part time as a driver. He has been with Phillips Energy for eight years as a part time employee. Eric has worked as a Firefighter/EMT full time with the City of Newport News for the last 16 years. His career as a first responder began when he served in the United States Navy where he got his first taste of firefighting while dealing with shipboard fires. Eric started volunteering and eventually transitioned from the navy to a full time firefighter.

“I like the schedule and the camaraderie with the people I work with,” said Eric. “No day is ever the same and while most of what we do is routine, every once in a while you come across a situation where you make a true difference in someone’s life…when that happens, it makes all of the training and time away from home all worthwhile.”

Seth Foster does a little bit of everything at the Gloucester location. He’s been with Phillips Energy for almost two years working in the Facilities Department. He has volunteered with the Hartfield Fire Department in Middlesex for 13 years.

A love of helping people and a passion for the community runs deep in Seth’s family. His father, mother and brothers were all firefighters as well and Seth believes it just felt like the right thing to do.

“You never know what you are going to get and each situation is different,” said Seth. “I once helped a teenager, 17 years old, who hit a tree and I was the first once on the scene. I started first aid and saved her life.”

Jason Hall has been with Phillips Energy for 11 years and is currently the Manager at the Mathews location. He has volunteered with the Mathews Volunteer Rescue Squad for the last decade.

“I enjoy the adrenaline rush and giving back,” said Jason.

Carroll Rilee Jr. has worked at the Gloucester location as an oil driver for the last 16 years. He was even with the company when it was J.C. Brown Oil Company. Carroll began volunteering with the Gloucester Volunteer Fire Department nearly 40 years ago.

“At the time, I thought it was a good things to do so I started with the rescue squad but taking classes was too time consuming so I stayed with volunteering,” said Carroll. “The most rewarding part is knowing that you were there to help somebody survive.”

Don Townsend started with Phillips two and a half years ago as a driver at the Gloucester location. He’s been a Mathews County volunteer firefighter for 15 years. Don began his journey as a first responder when the county was short on help and the Captain asked him to help.

“It is my county so of course I said yes,” said Don. “It’s hard to explain why you do it but getting to a scene, doing my job, seeing a thankful smile and knowing you helped is very rewarding.”

Charles Wood has been with Philips Energy at the Gloucester location for over 16 years. He was with the company when it was called J.C. Brown Oil Company. Charles has volunteered with the Gloucester County Fire Department for the last 24 years.

Growing up, Charles wanted to do three things: be a firefighter, drive a truck and operate heavy equipment. He says he gets to do two out of those three things while working for Phillips and being a volunteer firefighter.

“I like helping the community and helping people,” said Charles. “The enjoyment of helping somebody is the biggest thing I get out of it.”

In honor of the first responders throughout our community, Phillips is offering $5 off your propane cylinder refill. Simply stop by any Phillips Energy location and show your ID as a first responder. This offer is good through June 30, 2015.