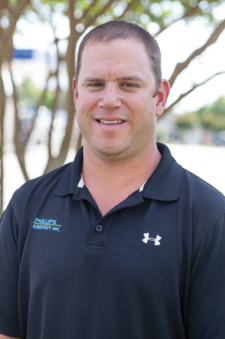 He started at Phillips Energy in the summer of 1992 pumping gas, and today we’re proud to introduce Matt Taylor as Phillips Energy’s first General Manager.

“Matt has grown up around here as much as John and I have and we’re thrilled to have him leading this company and this community into the future,” said Phillips Energy Vice President Elizabeth McCormick.

Matt started at Phillips Energy when he was 16, hired on by Frank Phillips (John and Elizabeth’s father) “when Phillips was just an oil company,” Matt recalls. “Mr. Phillips really helped teach me all about business, was a true mentor. I can remember how he handled people, how he was so courteous to everyone. He remembered everyone’s name and could tell you exactly where on their property their oil tanks were.”

After graduating from Gloucester High School, Matt stayed on with the Phillips Energy team. In 1994, when the company started branching out to propane, Matt helped run gas lines, set gas tanks and learned everything he could about the propane business. He worked his way up, becoming the lead team member on the trucks running the gas lines, then moving to the Phillips Energy Mathews location as its on-site manager. In 2013 he was promoted and became the company’s first General Manager.

“I didn’t think when I was pumping gas as a teenager that this would be the path my career would take,” Matt said. “But I’m so glad it did. Phillips Energy is like a family to me.”

And so are all our customers.

“That’s the Phillips way. I’ve always told people that there are a lot of companies that sell gas and propane. What makes us stand out is our people. It’s our team making sure customers have heat. It’s serving them and getting to them when they are in need, whether it’s for oil, propane or their HVAC. It’s treating everyone like family.”