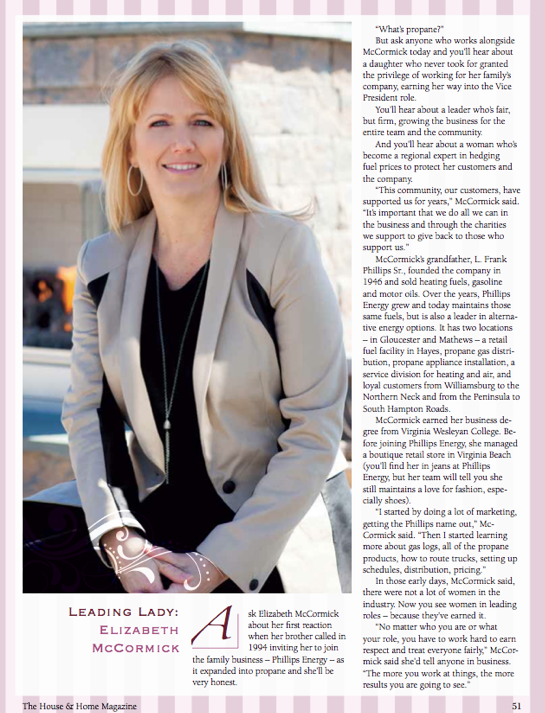 Open the pages of House & Home Magazine in Williamsburg, Va. this spring and you'll see the face of Phillips Energy's own Elizabeth McCormick. We're delighted to share that she was named one of the area's leading ladies! Here's what they had to say about her!

Ask Elizabeth McCormick about her first reaction when her brother called in 1994 inviting her to join the family business – Phillips Energy – as it expanded into propane and she’ll be very honest.

But ask anyone who works alongside McCormick today and you’ll hear about a daughter who never took for granted the privilege of working for her family’s company, earning her way into the Vice President role.

You’ll hear about a leader who’s fair, but firm, growing the business for the entire team and the community.

And you’ll hear about a woman who’s become a regional expert in hedging fuel prices to protect her customers and the company.

“This community, our customers, have supported us for years,” McCormick said. “It’s important that we do all we can in the business and through the charities we support to give back to those who support us.”

McCormick’s grandfather, L. Frank Phillips Sr., founded the company in 1946 and sold heating fuels, gasoline and motor oils. Over the years, Phillips Energy grew and today maintains those same fuels, but is also a leader in alternative energy options. It has two locations – in Gloucester and Mathews – a retail fuel facility in Hayes, propane gas distribution, propane appliance installation, a service division for heating and air, and loyal customers from Williamsburg to the Northern Neck and from the Peninsula to South Hampton Roads.

McCormick earned her business degree from Virginia Wesleyan College. Before joining Phillips Energy, she managed a boutique retail store in Virginia Beach (you’ll find her in jeans at Phillips Energy, but her team will tell you she still maintains a love for fashion, especially shoes).

“I started by doing a lot of marketing, getting the Phillips name out,” McCormick said. “Then I started learning more about gas logs, all of the propane products, how to route trucks, setting up schedules, distribution, pricing.”

In those early days, McCormick said, there were not a lot of women in the industry. Now you see women in leading roles – because they’ve earned it.

“No matter who you are or what your role, you have to work hard to earn respect and treat everyone fairly,” McCormick said she’d tell anyone in business. “The more you work at things, the more results you are going to see.”